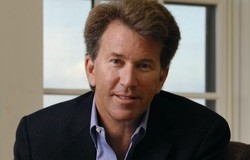 Jeffrey Hollender, who describes himself as a leading US authority on corporate responsibility, sustainability and social equity, visited the Mondragon coops recently and has posted a series of articles on his website.

In his first article, Hollender explains the basic "people before profits" principle of Mondragon.

"I’m compelled to start with purpose, mission and values," writes Hollender." Whatever one might conclude about Mondragon, the single most important—and profound—part of my experience is the breathtaking beauty of 120 businesses, employing 85,000 people with sales of 15 billion Euros that are dedicated in everything they do to the dignity of the human spirit.

"In an industrial, and now post-industrial age, that has turned people in to disposable assets, into tools at the service of capital, it is so hopeful to experience business at scale that chooses to honor the essence of humanity over the accumulation of wealth in service of capital."

The second article looks at the training offered by the Mondragon system.

"What if the board members of every US corporation were trained in the basics of corporate governance – before they took office?" Hollender asks. "Imagine that kind of business world."

"Such ideas are not “what ifs” at the Mondragon Cooperative Corporation. They are realities.  “Training must precede the establishment of a cooperative! Trained people will build better companies. To enter a cooperative you must value the community ahead of yourself,” our tour guide enlightened us.

"He was speaking at Otalora, one of the cooperative’s thirteen universities and the equivalent of a business school – it’s where we spent several hours understanding the training program offered to every new coop member elected to a coop board or a as Governing Council Member."

How do you compete against the business practices of China?

“With quality and good service. We have a co-op that produces bicycles called ORBEA. These bicycles are very expensive ($5,000 to $20,000) but much better quality than the Chinese products. I recommend that you read an interesting paper “MONDRAGON Innovating a Human Centered Globalisation” by Nick Luzarraga, PhD (Author’s Note: Dr. Luzarraga was part of our own MIT group). The major conclusion of this paper is that when we [Mondragon] create two jobs abroad, we create one locally.”

Are workers in your international locations also cooperative members?

“No, not yet.” (This was a topic of almost every conversation. Many worker/owners identified it as the #1 challenge for Mondragon. At numerous international factories were efforts were made to convert employment into cooperative ownership, local employees were unwilling to invest their own salaries in an ownership share. While these efforts were unsuccessful the consensus of our group is that greater structural innovation and flexibility is required on Mondragon’s part.)

How do wages compare between how much you pay here in Mondragon and in factories you own and operate internationally?

“We offer not only wages but also other benefits that make labor stable. We definitely pay more than our competitors so that labor does not leave our co-ops.” (However, there is currently no independent verification of formal benchmarking in place.)

Do you have a problem with managers leaving your co-ops for General Electric, General Motors or other international industrial conglomerates?

A Visit to Mondragon: People Before Profits (Jeffrey Hollender)

A Visit to Mondragon: Interview with Mondragon’s Director of Cooperative Dissemination (Jeffrey Hollender)
Posted by Stefan Gigacz at 4:59 AM